‘I spoke to my talented casting agent/ DJ/ street photographer friend Babycakes Romero on Wednesday (November 21st). He was at one of the Extinction Rebellion ‘events’, listening to (and photographing) some well-meaning and brave environmental protesters as they were roundly abused by anyone and everyone. Including ‘funnyman’ Jim Davidson. (He’s not big and he’s certainly not funny.)

Babycakes – let’s call him Jon – has blogged beautifully about the event here. I recommend reading his piece, having a think and then coming back to this blog. 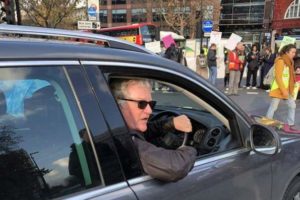 Because while I endorse the theory behind Extinction Rebellion (in the face of climate crisis, lawbreaking becomes morally justifiable), personally I can’t work out how angering people going about their everyday business is going to help.

As an advertiser, amateur psychology is something I invariably engage in on a day-to-day basis. And call me old-fashioned, but I reckon pissing people off is unlikely to win them round. That?s why calling poorly-educated Americans ‘a basket of deplorables’ didn’t quite pan out as she hoped for Hillary Clinton.

To me, one of the most puzzling aspects of the climate crisis is why fear, so often used as a motivator in advertising and by right-wing politicians, is ineffective when applied to the extinction of species or the heating of the planet.

It must be because the observable downsides of global warming are, for most people in the developed world, still intangible. Whereas terrorist atrocities in the name of Islam or the presence of a Portuguese cafe on the hight street are visible evidence of something having ?gone wrong? and requiring (invariably) a simplistic and ignorant solution.

It?s crazy that an entire industry such as anti-bac cleansing wipes, for example, worth millions of pounds, is based on the threat from invisible germs, yet the visible evidence of crop failure, forest fires and the like are not sufficient to persuade us to take action on climate change. It’s almost as if using facts and evidence to win arguments is insufficient. Or, more likely, that the sacrifice required to solve it is simply too great.

So how do we address this?

When Michelle Obama says that she and her husband were determined, come what may, to continue ‘punching up’, she captured the horrible dilemma that faces anyone in public life when they rely on reason and logic to persuade an understandably less well-informed populace that their beliefs may change were they to consider the following salient facts, especially when ignoring facts and believing crude prejudice seems to be the order of the day.

It’s hard, but the Obamas’ ability to do that is why they write books about ‘The Audacity of Hope’, and why those of us who find them inspiring are disappointed when they’re replaced by people who don?t know the meaning of either audacity or hope.

Is it time for progressives to punch down’ If punching down means blocking traffic, I’m not so sure. I know the Extinction Rebellion protesters are trying to disrupt, not persuade, but still.

If evidence won’t work (and it won’t) and preventative action is too painful to take, punching up is the only way we can conceivably save the planet from disaster. Good luck to anyone who can win an election on the platform Babycakes describes in his blog. If a referendum can be swung by a significant anti-immigration vote garnered from the people least likely to live in places affected by immigration, I suspect anyone proposing no flying, no driving and no consumerism is going to lose face and their deposit, in that order.

So what will punching up to save the planet look like? Here are some suggestions:

It will look like renewable energy solutions, made affordable by governments’ belated realisation that they cannot afford (literally) to ignore the problem any longer.

It will look like cars and planes fuelled by anything that doesn’t emit CO2 (see the reason given above).

It will look like the advance of tech solutions that will address the disappearance of pollinators and the reduction in fertile arable land.

It will look like the removal of GDP and economic ‘growth as an objective, and a focus on the worth of clean air, clean water, animal life and the natural world.

It will come from the displacement of people in one of the more powerful countries (here’s looking at you, Trumpville, Wisconsin).

And it will come from the planet itself, as water, food and hospitable land is made scarce and people fight for alternatives.

Are those last two punching up? Not really. All I know is that by the time there’s no guarantee I’ll have clean water coming out of my tap, I’ll be slightly less annoyed by someone disrupting my ability to drive through Elephant & Castle. Hunger and thirst are pretty motivating, I reckon.

In the meantime, I remain convinced that the only benefit of last week?s Extinction Rebellion was that it upset Jim Davidson. You take your consolations where you can find them.