The proof is in the podcast

I spent most of my teens and twenties recommending bands to other people. These days, it?s podcasts.

I?ve mentioned Athletico Mince before in this blog. It?s basically Bob Mortimer being Bob Mortimer, ably assisted by Andy Dawson who manages to balance genuflection at his partner?s comedy genius with his own contribution to the entertainment value perfectly. If the idea of Peter Beardsley confessing the intimate secrets of a life that sees him continually forced to prepare poached eggs for his emotionally abusive wife makes you smile, this may be for you.

In the past couple of weeks I have discovered another series that causes me to involuntarily snort on public transport in the shape of Dear Joan and Jericha, which involves Vicki Pepperdine and Julia Davis playing agony aunts. That?s all you need to know: just listen.

But I?m here to talk about Revisionist History, Malcolm Gladwell?s quite brilliant examination of ?things overlooked and misunderstood?. I started listening during series 2 and am looking forward to going back to listen to series 1, but series 3 is strong and provides as good a starting point as any. 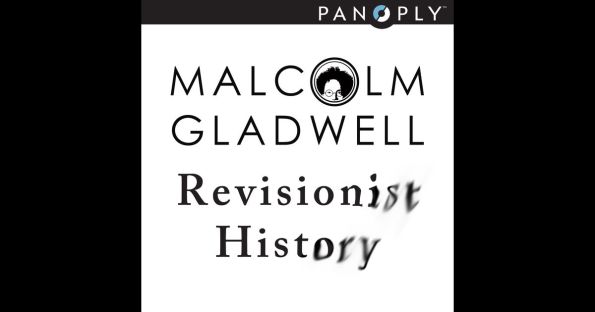 In episode 2, Gladwell asks how much proof we require before we act on something that seems, clearly, to demand action. To make his point, he references lung disease in coalminers and brain damage in football players (not soccer players, for clarity). I had thought he would mention the elephant in the room ? which in this case, is the fact that there may soon be no elephants left to put in a room. But he leaves climate change and the mass extinction we are currently idly undergoing out of the podcast, letting us, I assume bring our own examples to the table.

Why am I recommending this? Because nearly every episode contains an insight so jaw-dropping and breathtaking that I have discovered for myself how those idioms gained traction. Gladwell has always had a gift for revelation, but this podcast is the perfect medium for him.

Episode 5 of the current run is the perfect example: 30 minutes of erudition, poetry and forensic storytelling; an argument so elegantly and artfully structured that when the lightbulb finally goes on it floors you. It culminates in one of the more staggering mic drops I have heard. If, like me, you despair of the ignorance, bigotry and hate that seems to pervade most online debate, listen to this brain balm and play it to the next person who thinks that putting up more barriers and building more walls is a good idea. Reader (spoiler alert), it isn?t.